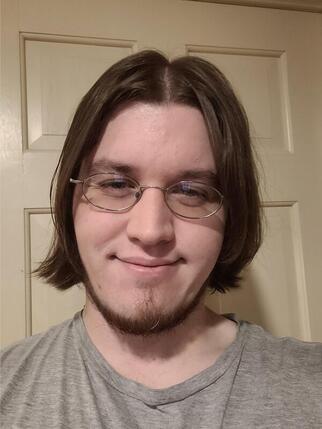 James received his Bachelor of Science degree in Biochemistry from Kennesaw State University in 2017. During his time with the Department of Chemistry and Biochemistry, he performed research in the Shaw lab focusing the synthesis and characterization of a novel porphyrin. In addition, he also worked in Msimanga lab concerning quantitation and chemical characterization of various OTC medications.

After completing his bachelor degree in chemistry, he worked as a chemist for Birla Carbon’s Analytical laboratories for 2 years before returning to KSU to pursue his Masters degree in Chemical Sciences.

He is currently a member of the Halim Laboratory where he is investigating potential peptide inhibitors of the SARS-CoV-2 main protease. 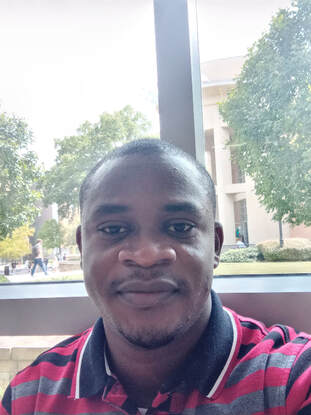 Oluseyi received his Bachelor of Technology degree in Pure and Applied Chemistry at Ladoke Akintola University of Technology, Nigeria, in the year 2012. During his course of study, he specialized on the science of environmental remediation using adsorption technology, under the mentorship of Professor O. S Bello.

His undergraduate research work was based on the preparation and characterization of agricultural based adsorbents for the removal of dyes and heavy metals from industrial effluents.

After his graduation, he joined Christ the King College, Ibadan, where he taught high school chemistry for some years. He thereafter worked with Nestlé Nigeria as Nutrition Advisor for six months.

Currently, Oluseyi is pursuing his Master’s degree in the department of chemistry and biochemistry at Kennesaw State University.

​In Dr. Halim group, he is focusing his research on deep eutectic solvents and its impact on protein structure and dynamics using various techniques including FT-IR, Raman, HPLC, mass spectrometry and molecular simulations.

Breauna was born in Virginia, but moved to California and lived there for 13 years. She moved to Georgia in her sophomore year of high school and have lived here ever since.

Breauna graduated from Cook County High school December of 2020 and is currently pursuing a bachelor’s degree in biology at Kennesaw State University. Her goal is to go to Morehouse School of Medicine pursuing a career in cardiothoracic surgery.
​
In high school, she was in track and volleyball, and even attended an internship at Morehouse School of Medicine known as “community health worker program for high school and young adults” in 2019.

In Dr. Halim’s research group, Breauna is working on snake venom peptides against the viral proteins of SARS-CoV-2.

Aisha Mohammed was born in Snellville, Georgia and has lived in the state ever since. After graduating from Northview high school in 2019, she has been majoring in Software Engineering at KSU.

As a software engineering major, Aisha likes to learn different programing languages and apply them to various ventures. Out of the languages she’s learned so far, Java is her favorite. When she’s not coding away, you can find her playing her favorite video games, reading thrillers, and drawing. 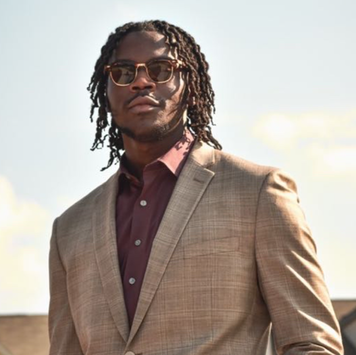 Adam was born in Livingston, New Jersey but he has lived in Georgia for majority of his life. In 2018, He graduated from Grayson High School located in Loganville, Georgia.

At Kennesaw State University, he is pursuing a degree in interactive design with a minor in software engineering. His goal is to develop programs and applications that make life easier for people. He played drums from when he was 5 years old but stopped in high school. His hobbies now are event coordinating, boxing, and skateboarding.
​
In Dr. Halim group, he is currently researching on bioinformatics and molecular modelling associated to the cell penetrating antimicrobial peptides. 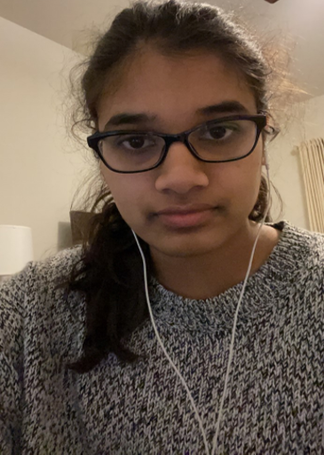 Sareena was born and raised in Georgia but moved to India when she was 8 years old. She came back to Georgia last year and started going to KSU. She is currently pursuing a bachelor’s degree in biology. After graduating, she wants to go to medical school and earn an MD so that she can work as a doctor.

Her goal is to travel remote areas where people are finding it hard to get proper medical care and help them. She is also very interested in pursuing further research on viruses like COVID-19. Her hobbies are reading, drawing, playing video games, and skateboarding.

In Dr. Halim’s lab, Sareena is working on epitope based peptides from SARS-CoV-2 and their interaction with major histocompatibility complex (MHC) class I and class II proteins. 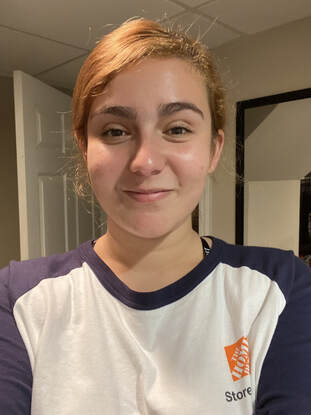 ​Noam was born and raised in Israel, graduated from Sha'ar Hanegev high school, and served in the Israeli military. In 2020, she moved to the United States to pursue a college degree in chemistry at Kennesaw State University where she is currently a freshman. After graduating from KSU, Noam wants to pursue a career in pharmaceutical chemistry.

In high school, She loved studying chemistry and playing the piano. Playing piano is a big part of her life today as well as science.

Aamna was born in Pakistan and she completed her high school in Pakistan. In December 2020, she moved to US pursuing a degree in biochemistry at Kennesaw State University. After graduating from KSU, she would like to work in the field of molecular genetics.

During her high school years in Pakistan, Aamna worked as a volunteer for various community services. Besides her community works, she enjoys painting, drawing and learning more about genetics in real world. 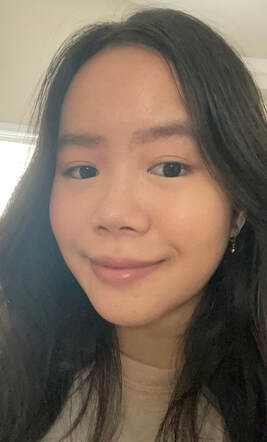 ​
​Grace was born in Marietta, GA and has been her for all of her life. She graduated from Sprayberry High School in 2021, and is planning on majoring in Biochemistry at KSU.

Grace is involved in a few clubs, such as AMSA and MIM, and plans on participating in many research projects. She plans on going to medical school to become a pathologist.
In her free time, she loves to watch shows, hang out with friends, or play with her dog
​(also loves cats).

Grace received KSU first-year research scholar award to work with Dr. Halim focusing her research on 'antiviral peptide therapeutics targeting the spike protein of SARS-CoV-2'.
As a First-Year Scholar, she is excited to learn new lab techniques and is eager to design and optimize new peptide candidates from SARS-CoV-2. 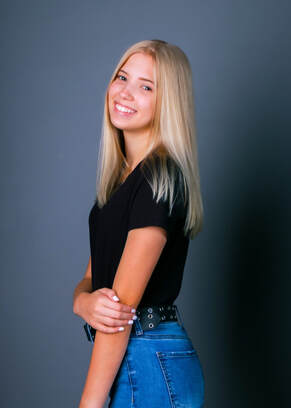 Taylor is from a small town near Athens named Monroe, Georgia. She graduated from Walnut Grove High School in May 2021. Currently, Taylor is pursuing a degree in  biochemistry at the Kennesaw State University.

After graduating, she is planning to attend a graduate degree in pharmacy and eventually would like to pursue a carrier as a research scientist at the Centers for Disease Control and Prevention (CDC) headquarters in Atlanta.

Her hobbies include baking, painting, and gardening.

​As a freshman, Taylor received the first-year research scholar award, and she is working on 'antiviral peptide therapeutics' project under the supervision of Dr. Halim. 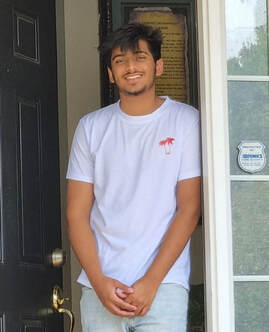 ​Mohammad was born in Chattanooga, Tennessee but has lived in Georgia the majority of his life. He graduated from high school in December 2020 and is currently pursuing a bachelor's degree in Biology.

Mohammad's goal is to attend Medical School after his bachelor's degree and is interested in psychiatry. He is currently working as a scribe in the Emergency Department and is involved in numerous clubs at KSU. His interests include playing table tennis, travelling, and playing video games. 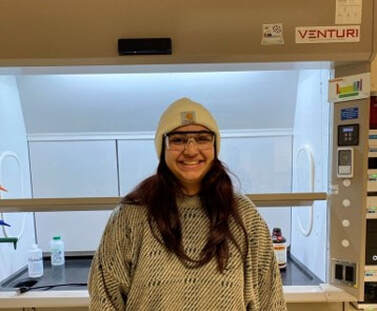 Indus Wasti was born in Denver, Colorado but she moved to Georgia during pre-school and has been there ever since. In 2021, she graduated from Johns Creek high school located in Johns Creek, Ga.

She is currently pursuing a degree in Biology at Kennesaw State University and is in her freshman year. After graduating she hopes to go to medical school and get her M.D.

She would like to go into the field of pathology and is very interested in studying and diagnosing diseases. For fun she loves to read, play with her cat, and spend time with loved ones.

Indus joined to Dr. Halim lab as first-year scholar and will focus her study on peptide design targeting the RBD-ACE2 complexes in SARS-CoV-2. 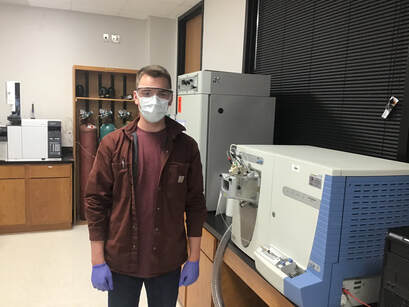 Paul Gambill was born in Fayetteville, Arkansas and has stayed in the area since. Paul graduated from Alma High School in 2020 and continued his education at UAFS, pursuing a biology major. Although a biology major, a good understanding of chemistry is essential to understanding the intricacies of life on a cellular scale.

​In Dr. Halim’s lab, Paul is not only excited to gain knowledge that relates to classes he takes, but he is also excited to gain valuable knowledge in the field of experimental chemistry. When not found at school, he enjoys flying, spending time outdoors, and playing and listening to music. In Dr. Halim’s lab, Paul is doing research utilizing mass spectrometry and IR spectroscopy. 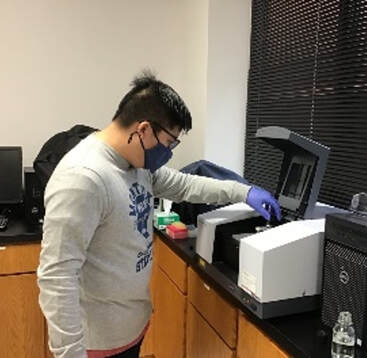 Khuong (Peter) Ta was born in Cantho, Vietnam. After finishing his Junior year at Ly Tu Trong high school, he moved to U.S as an exchange student. Currently, he is pursuing a degree in biochemistry at the University of Arkansas-Fort Smith. He also works as a student worker in the School of Health Science. Peter is also participating in the UAFS Japan Club and a member of Pi Kappa Phi Fraternity.

In his free time, he enjoys playing League of Legends, watching movies, study about history and political facts, listen to music and hang out with friends.

​In Dr. Halim’s lab, he is doing research on synthesizing and characterizing metal-based nanoparticles. 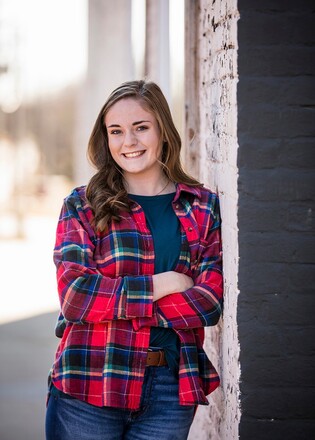 Austyn Russell was born in Colorado but soon left to travel to Europe as a small child. She eventually ended up in Gravette, Arkansas where she completed her high school and graduated in the summer of 2020.

​Austyn moved to UAFS in the fall of 2020 with a major of Biomedical Sciences, in hope of becoming an Optometrist later on.

In high school, she was very involved with athletics and student government. She played both basketball and softball. She was also elected at Student Body President for her senior year. Outside of school she loves to be with her friends and loves being outside. In 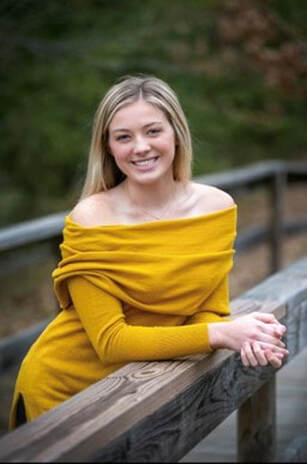 ​Mary-Kate Wewers was born and raised in Fort Smith, Arkansas and graduated high school from Northside in 2020. She is now a freshman at UA-Fort Smith where she is majoring in Biology and planning on attending medical school to become a dermatologist.

Mary-Kate stays involved in our community by volunteering at a local Boys & Girls Club. She has been a volunteer dance coach for five years now. In her free time, she enjoys reading and spending time with family. 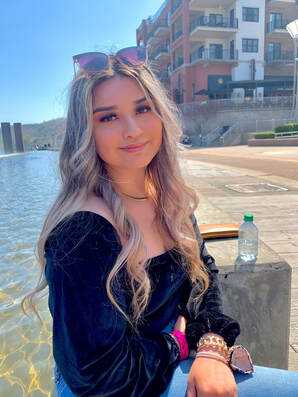 Kairy Galvez was born in Springdale, AR and currently lives in Rogers, AR. Kairy graduated from Rogers Heritage High School in 2020 with her associate of science and is currently majoring in biology with a minor in spanish. Her goal is to further her degree to become a Physician Assistant and work in either Surgery or Dermatology.

Kairy also has a passion for helping others. At the University of Arkansas-Fort Smith Kairy is a member of LionHeart and volunteers regularly at the Dave Stevens Lion Pantry. In her free time she enjoys being outdoors and spending time with her family and friends. 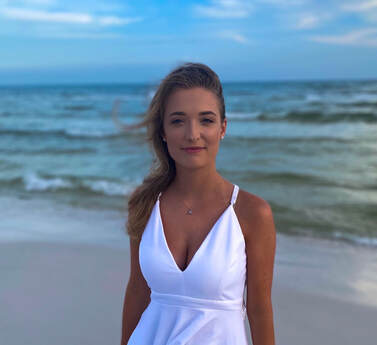 ​Melina Reeves (born Müller) was born and raised in Hamburg, Germany. She graduated from high school there in 2019 and came to the United States to pursue a college degree in the fall of the same year.

She is currently attending the University of Arkansas Fort Smith pursuing a bachelor of science in Biology. She is a sophomore and planning to attend medical school after graduation. Melina enjoys reading and spending time with her family and friends.
​
In Dr. Halim lab, she is performing research on antiviral peptide design for Covid-19